NO EXCUSE REGARDING “CLOWN” OBAMA

NO EXCUSE REGARDING “CLOWN” OBAMA 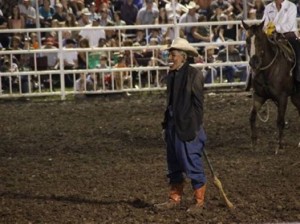 I’m referring to what happened this weekend at the Missouri State Fair rodeo in Sedalia.

The announcer asked spectators if they wanted to see “Obama run down by a bull”.
Reports say the crowd went wild … with support.

That’s when a rodeo clown wearing a President Obama mask stood in the bull riding arena.
Another clown ran up to the one wearing the Obama mask, pretended to tickle him and played with the lips on the mask. (That act alone is disgusting.)

The entire event lasted maybe 15 minutes before the masked clown had to leave as a bull got too close.

This was supposed to be funny?

Joking about harming our President?

I think this display borders on “inciting”.

I also think that the event and crowd reaction would be frightening to any African Americans at the Fair … or any Americans of any color … who might have stood up and criticized what was happening.

One witness said the display had the feeling of a “Klan rally”.

Our Constitution allows for Freedom of Speech … which is a cherished right.
Unfortunately, history shows that too many times … some use that privilege to go far beyond “acceptable” boundaries.

Of course, your definition of “acceptable” might not be the same as mine, but I will tell you that my line is clear and unwavering on this point: You do not even joke about harming the President of the United States.

You can fight President Obama on his policies; you can denounce his philosophy; you can state that he is a terrible President; if you want, you can even make jokes about him.

But you can’t think this event was funny.

Sunday, State Fair leaders issued a statement saying the show was “inappropriate — We strive to be a family event and regret that Saturday’s rodeo badly missed that mark.”
The Missouri Rodeo Cowboy Association issued an apology, “The Sport of Rodeo is not meant to be a political platform — All Members … are very proud of our Country and our President.”

The apologies are made, but the act is now history, can’t be changed and will forever be linked to the State of Missouri.

In my opinion, this was just short of “lynching” President Obama in front of the crowd.