BLACK BACK LASH FOR OBAMA

Home/News/BLACK BACK LASH FOR OBAMA
Previous Next

BLACK BACK LASH FOR OBAMA 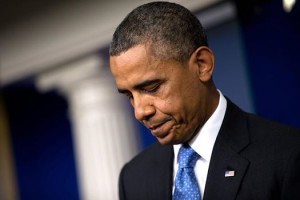 In a piece for Huff Post BlackVoices, Savali suggests that Obama dropped an opportunity to speak about Martin and the acquittal of his killer, George Zimmerman.

She went on to write that Obama took a “play from the rule book of every racist pundit” who suggested that Martin was a “teen thug with a history of bad behavior”.

That from an Obama supporter because the President said, “We all know that young African-American men disproportionately have involvement in criminal activities and violence…”

The writer continues: “… (Obama’s) flippant statement about Trayvon’s presumed character and his stereotypical assessment of the black community beg the question:
What in the hell does the slaying of an unarmed black child have to do with black criminality?”

Those words of anger were followed by this statement: “It is no easy feat to come across as both cowardly and concerned at the same time.”

Savali concluded: “After watching President Obama’s appearance on Leno, I’m extremely pleased that I held my applause after his “eloquent” impromptu speech on Trayvon Martin last month. Deep down I knew that something he said — or didn’t say — down the road would prove he didn’t deserve it.”

So what do we take from this?

For all the Trayvon Martin “likeness” that President Obama put on the nation during the trial and after the verdict … for all his efforts to “shame” whites into accepting that Trayvon’s death was wrong — Obama is learning that bigotry is a two-way street … and maybe beginning to learn it for the first time.

In the South, there’s a saying, You know that you are wrong … when your own dog bites you.