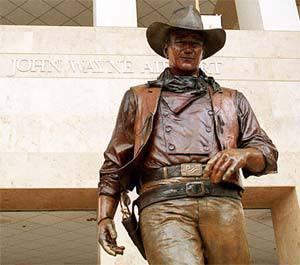 “My heroes have always been cowboys.” Recorded by Waylon Jennings (1976) and later by Willie Nelson

In other words, I’m pretty shallow.

Westerns have always been a favorite so if you are expecting me to echo the opinions of “experts” that this latest Johnny Depp movie was a bust … well, you can go kiss the south end of a north bound horse.

Granted, the film took a lot of liberties with my historical image of the Lone Ranger, but it was a fun ride. And when the “William Tell Overture” starts playing (late in the movie), I challenge you to sit still.

I grew up on tv and movie cowboys: Roy Rogers, Gene Autry and the cowboy shows: Gunsmoke, Bonanza, The Rifleman, Have Gun – Will Travel, and of course, the Lone Ranger.

Two of my favorite actors to ever play cowboys: Clint Eastwood and the one and only, John Wayne.

Once I met Eastwood, just briefly, but I never had a chance to meet John Wayne.

There was the time that I flew into John Wayne Airport in Orange County, California, and did something I’ve never done before or since. I asked someone to take a picture of me in front of a statue.

It was the 9 foot bronze of The Duke.

There he is … captured in mid-stride, his left arm bent with his hand near his belt buckle, and his right hand just inches from a six-shooter strapped low on his waist.

That’s an iconic image of John Wayne and for any cowboy.

When I was maybe 5 or so, my favorite cowboy was Hopalong Cassidy.

My mother would tell the story of how she would call me in for dinner (that would be the noon meal for those of you not raised in the South), and she would have to hold the door open for me and Hopalong.

He was always right behind me, and when I put my stick horse (Dusty) in the corner, Hopalong tied up Topper to the doorknob.

Mom had to put out an extra plate because I insisted that Hopalong was eating with us.

I can see some of you muttering, I knew something was wrong with that Conners boy; that explains why he always appeared a little “teched” in the head.

Yeah, in those days, I created my own little world of me and Hopalong … fighting the bad guys, stopping train robberies and saving women and children.

But it was a world where good always won and evil was always defeated.

I miss Hopalong and those days.