A CROSS TO BEAR / BARE

A CROSS TO BEAR / BARE 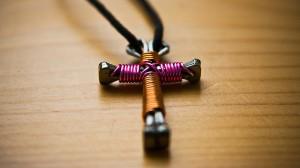 “A lot of people are bored of all the political correctness.” Clint Eastwood

And I would add … angered.
Consider this latest case.

At Sonoma State University, a 19 year old student was told – you have to remove that cross necklace because it might offend someone.

At the time, Audrey Jarvis was at a student orientation fair promoting the school’s Associated Students Productions. That’s when a school administrator told her: you can not wear your cross because it might offend others, it might make incoming students feel unwelcome, or it might cause incoming students to feel that ASP was not an organization they should join.

Audrey called her parents, and her mother was quoted as saying: She doesn’t wear the cross as a fashion statement … it’s a statement of her faith.”

Mrs. Jarvis said she reminded Audrey that we are still one nation under God, and said her daughter replied, “Mom, it doesn’t feel like that here. Our faith was attacked. It’s unnerving. I know what’s going on in this country. I know Christianity is being attacked. Now, I know it first-hand and it sickens me and saddens me.”

That’s a 19 year old college student making a statement for all of us to hear.

Since all of the publicity, the University President has issued an apology and said the school officer who made the demand was wrong.

Well, that’s a good step, but what about training staff to “think” before taking such action; I thought a university was supposed to be a place of “higher learning and the educated”. This act just reaffirms that many such places are run by “the ignorant” and that “political correctness” only applies when it fits a “liberal agenda”.

You can be Jewish, Muslim, Buddhist or any religion of your choice; it won’t be my religion, but I am not offended you wearing jewelry or clothing that reflects your faith.

Add to that statement … if you are offended by the cross around my neck … well, I’ll close with another Clint Eastwood quote: “I tried being reasonable; I didn’t like it.”