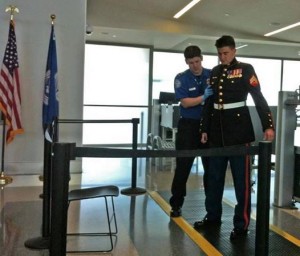 “At some places I’m treated like royalty and at some like a terrorist. There’s got to be something in the middle.” — Retired Marine Cpl Nathan Kemnitz

In 2004, Kemnitz was severely injured in a 2004 roadside bomb attack in Fallujah; for his actions and service to our country he has several medals which he wears on his “dress blues”. He also limited use of his right arm and cannot lift it above his head.

Recently, Kemnitz was going through airport security on a trip to the California state capitol building in Sacramento.

Before we continue, any veteran knows the value of good security and will be the first to admit that when you start making “exceptions” you breach security protocol. Certainly, a highly decorated veteran realizes this point —- BUT, once again, let’s exercise some “common sense and respect” in how we treat citizens and especially our nation’s heroes.

Here is what happened as reported by The Military Times:
Kemnitz shows up at the airport in his dress blues wearing medals which few will ever wear or have or desire to pay the price to wear — and at one security point he was told: you are wearing “too much metal”.
At the airport, a TSA screener looked under the medals, ran his hands under the Marine’s waistband and swabbed his shoes for explosives.
Later, TSA asked Kemnitz to raise his arms for the body scanner, and he said, “My right arm doesn’t work; it’s a lot of hassle for me to do that.”
Kemnitz was annoyed, but didn’t complain.

Then at the capitol building, security guards asked him to remove his dress blue blouse “because he was wearing too much metal”.

Take off his uniform because he had too many medals!?!?

That’s when the retired Marine did get upset as he said the guard was rude and unapologetic.

His escort, Patricia Martin, took pictures and wrote to Veterans Affairs Secretary Eric Shinseki: “What does a uniform and heroism represent if our own citizens — in this case employees of the TSA and security personnel — have no regard for them? — I feel so strongly that you need to know just how shamefully even a Purple Heart recipient/disabled veteran can be treated by some TSA and security employees.”

The Military Times posted: In March, bystanders notified Rep. Duncan Hunter, R-Calif., about what they perceived to be maltreatment of a double amputee by TSA screeners at Phoenix’s Sky Harbor Airport.
Concurrent with that incident, TSA announced it had changed its rules to eliminate a requirement that injured troops remove their shoes, jackets or hats. But to receive the expedited service, TSA asks affected personnel to call the agency’s Military Severely Injured Joint Service Operations Center before traveling.
TSA also offers escorted “curb-to-gate service” for injured or ill personnel who request it as well as the TSA Pre program to service members with a military common access card at four airports: Charlotte Douglas International Airport in North Carolina, Ronald Reagan Washington National Airport, Seattle-Tacoma International Airport, and Washington Dulles International Airport.

Now, here’s a kicker to this story: Retired Marine Cpl Nathan Kemnitz made the flight to go to the state capitol … because he was being honored as his legislative district’s veteran of the year.

Cpl Kemnitz, thank you for your service and Semper Fi.