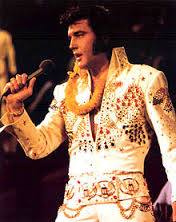 As of 2008, one source says based on the “formula” of ratio of grown of impersonators and years since 1977 — there were 85,000 Elvi in the world; my math has never been that great so I don’t know how accurate that prediction is, but I don’t doubt it.
Then, the same formula predicts that by 2019, one-third of the world’s population will be Elvis impersonators. By 2043, 9.4 billion will exist — slightly more than the population of the world … so we might have some from “another world” (as if some of them aren’t already).

Why so many?
Check this symbol: $$$$$$$
That’s the answer; there’s a lot of money still being made just by pretending you are Elvis.
When he died at age 42, he had 5 million in the bank, and has continued to make money long after his dead. He is ranked #2 on Forbes’ list of the 15 Top-Earning Dead Celebrities – behind Michael Jackson.

December 21, 1970, Elvis met President Richard Nixon. The King had written a 6 page letter asking to meet with Nixon.
The letter was delivered to Nixon aide, Egil “Bud” Krogh, who happened to be an Elvis fan. Krogh loved the idea of a Nixon-Presley summit and persuaded his bosses, including White House Chief of Staff Bob Haldeman, to make it happen.
Krogh later reported, “Presley indicated that he thought the Beatles had been a real force for anti-American spirit. The President then indicated that those who use drugs are also those in the vanguard of anti-American protest.”
Krogh said Elvis told the President, “I’m on your side.” He also said that that he’d been studying the drug culture and Communist brainwashing. Then he asked the president for a badge from the Bureau of Narcotics and Dangerous Drugs.
Nixon asked Krogh, “Can we get him a badge?”
Krogh said he could, and Nixon ordered it done.

Elvis appeared in St. Louis numerous times and maybe some of you saw him in person.
His last concert in St. Louis was March 22, 1976 at The Kiel. Harper Barnes for the St. Louis Post wrote: A packed house of about 10,500 was on hand to hear Presley, resplendent in spangled black pants, a black vest with a lot of cleavage and a ruffled blue shirt, do a 50 minute set.
Elvis’ last public concert was at Market Square Arena in Indianapolis, June 26, 1977.
He would die less than 2 months later.

I was on the air when the news broke, and I have many St. Louis viewers tell me that’s how they learned that The King was dead.

I never got to see him in concert; one time, I did fly to Vegas, but Elvis had come down with what they called “Desert Throat” … his voice was just too raspy so he was replaced by Bill Cosby.
September 9, 1956, Elvis appeared for the first time on The Ed Sullivan Show.

I didn’t get to see that performance.
Dad sent me out of the room so I wouldn’t see the vulgar dancing and pelvic gyrations.
But he and Mom watched it because I could hear the sound through our thin walls.
He did “Don’t Be Cruel” and “Love Me Tender.”
I was allowed back in the room until Dad realized that Elvis was appearing a second time.
Once again, I was banished but heard “Ready Teddy” and a short portion of “Hound Dog”.
Dad didn’t let me back into the room until he was convinced that Elvis was not going to show up again.

When I returned, he made some remark about “trash”, and while Mom kept her head down, fiddling with something, I caught a touch of a smile.
Contrary to Dad’s evaluation of the music and dancing, I think Mom liked Elvis.